5 BUSINESS SKILLS YOU WILL IMPROVE BY PLAYING DUNGEONS AND DRAGONS

Dungeons and Dragons is so much more than the thrill of battle, the crushing defeats, the critical misses and natural 20s it’s… Oh sorry, I think I already lost you.

Let’s wind things back a little.

Despite the game’s recent resurgence and growth thanks to incredible podcasts and Youtube shows like HarmonQuest and Critical Role, Dungeons and Dragons is still an overly nerdy enigma to a lot of people. When I mention that I run a Dungeons and Dragons Group online I’m either met with incredible enthusiasm or complete bewilderment.

In the first case, you find they are either already a player or they are incredibly keen to learn and don’t know where to start (hence the group we formed).

In the second case, they have either never heard of it or they’ve only ever seen it mocked as being a time wasting activity for socially awkward losers with body odour and bad acne.

I can’t completely lie here, I have encountered awkward players who don’t seem to realise that after hitting their teens they really should have started wearing deodorant.

I’ve even had to confront one or two players in the past, with mixed success.

But these players certainly don’t make up the majority and in my experience, the best players have always had incredible social skills, above those of the average person. In fact, it’s my belief that D&D fine hones many essential skills that we use socially and in business.

Below are just 5 things that I’ve learned playing D&D, that have been an asset to my professional life. 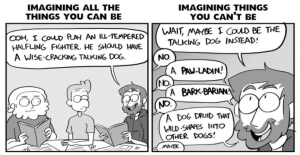 This one is a no brainer. Playing D&D requires you and a group of friends (strangers if you like to play on hard mode) to come together and create a completely fictional world that is magical and fantastic but still meaningful and believable. 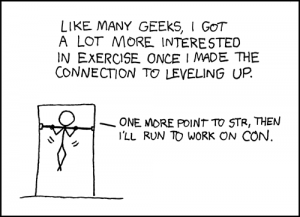 One of the most exciting elements in D&D is leveling.

It’s hard to come out the other side of a campaign without becoming obsessed with tracking your stats, planning for your character’s development and implementing new abilities.

D&D players become excellent goal setters and planners in the business world as they apply the skills they use time and time again to track the future development of Poof-Nackle Sparklegem the Gnome Rogue.

Technically you can play D&D without learning this skill, you’ll just die a lot and everyone will hate you.

Players constantly need to learn to work with other players who have completely different goals, skills, and backgrounds (sometimes no background if the player is really lazy, we call them a wildcard). Sure sometimes it’s fun to go against the party but most of the time the only way to get anywhere is to saddle up and take one for the team. 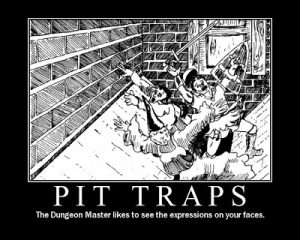 Ever been with your friends and pretended to be a group of 2ft tall gnomes who have fallen into an 8ft deep pit with no ropes and an unusual assortment of garden implements you stole one town over?

Well if you have you’ll know that there’s more than one way to skin a cat (there’s literally thousands depending on the state you want the skin to be in when you’re done, just ask the Orcs). Getting thrown into a bad situation you’ve never faced before and coming out the other side is a nightly occurrence in D&D games. If you want to get a creative problem solver in your business, hire a player I assure they will be creative and sometimes helpful.

Skill 5Accepting that some things are just out of your control

This is what makes D&D what it is. The inevitability that sometimes things just won’t work and sometimes, against all odds they will. The iconic D20 tempts the fate of every player and teaches them that despite the best-laid plans or the worst fumbles, some things are out of your control.

A natural 20 (the highest number on the dice) can mean your dwarf knocks down a castle wall, solo, with his face and comes out the other side unscathed.

A critical failure (1) means that even with 32 years of training your half elf thief jams his lock picks into a door, sets off an alarm, farts and then accidentally follows through. It’s a cruel game sometimes but you certainly learn that the failures have value of their own